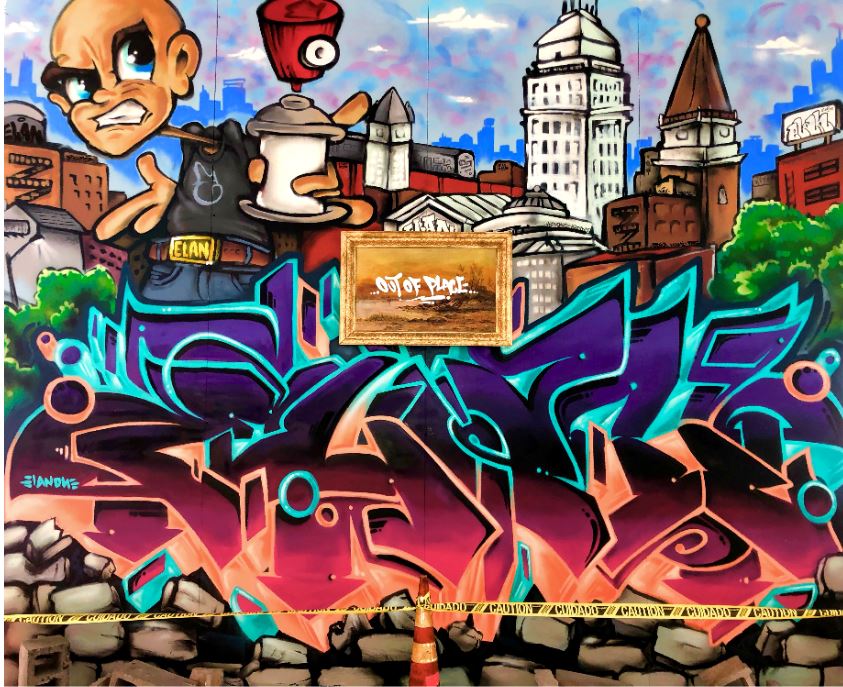 Tourism Live – Behind the Scenes with JM

Do you love graffiti?

What? WHOA! They are spray painting on the WALLS!!! inside the Morris Museum.
And, who said that was ok?

Dr. Cleveland Johnson, Executive Director and Ron Labaco, Director of Exhibitions & Chief Curator of the newly energized Morris Museum, that’s who. They had this idea – let’s celebrate the vitality of graffiti writing and street art in New Jersey and so they invited artist Will Kasso Condry to co-curate the show of twelve NJ graffiti artists to paint directly on the Museum’s walls. Thus was born the AEROSOL: Graffiti/Street Art/New Jersey/Now exhibit that opens September 19th and runs through March 15, 2020.

Participating Artists listed by their professional names are:

“It’s about honoring the graffiti culture and highlighting its legitimacy as an art,” says Ron Labaco, co-curator of the show, “We are presenting established and emerging artists – the emerging artist are the ones who are not necessarily working this full time, but are equally experienced. The museum has given them the liberty to paint what they want; to be authentic.”

New Jersey, uniquely positioned between Philadelphia and New York City, the two cities where it all began, plays a vital role in the ever-evolving aerosol art narrative. Legend says that graffiti began by a high school student in 1967 who “tagged” city walls to catch a girl’s attention. This became a compelling and highly visible form of self-expression, which drew others into the graffiti community throughout the 1970’s. The defiance of the rules, its originality and the chance to make their names seen was enticing and exhilarating, as well as provided them with a community. The graffiti movement developed their own cultural norms and rules and these young people helped to shape the art form and increased its popularity.

So, I went behind the scenes to see how they were actually going to pull this off and to talk with the artists. What I found was an enormous empty gallery with drop cloths on the floor and plastic over the windows to prevent errant spray paint, and a giant fan drawing air out a side door for cross ventilation.

I spoke with these inspired and devoted artists and watched as they were “throwing up”* their “pieces”* for the upcoming show on the towering gallery walls. There was strong sense of comradery in the room: spraying, talking, bro hugging and joking around with their friends/colleagues. And, they were loving it. Both the artists and the museum staff alike were bubbling with the chance to genuinely present this genre of art to new audiences.

I learned a lot. I got the chance to observe how it was really done – always wondering about the control of the spray and the smell of the paint. Here I saw that they had incredible control of the spray – where it went and how it was sprayed in strokes and gestures – there was a rhythm to it and each artist had their own way. I was concerned however about their thumbs, didn’t they get sore or tired?

I spoke first with Will Kasso Condry, the show’s co-curator, whose “tag” is Kasso. He is a well-established graff artist originally from Trenton and known in the field for painting “angels”, not the wing-ed ones, but highly respected graffiti artists who have passed away. He was spray painting a larger than life portrait of Jerry Gant, Newark’s Graffiti legendary “angel” and his mentor, on the walls for this exhibit (I can’t wait to see what it looks like when it’s finished). Kasso wanted to pay tribute to a man who had helped so many other graffiti artist navigate their lives and their art in the community. 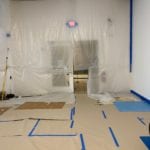 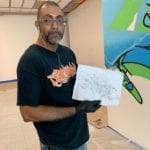 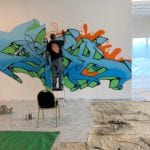 Doors all taped up 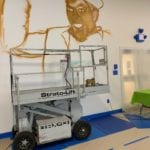 Kasso said he wants to make sure that the past artists are honored and respected for their work and appreciated for their persistence through the many challenges early graffiti artists faced. “When graffiti started it was all about the words & letters,” he said. “It’s different now; street art, like murals, overshadows the graffiti and can often diminish the importance of how it all began. The risk the guys took in the beginning to make their art was real and like anything else, it gave others the chance to build upon that and make it more legitimate.”

Then I met Prox, who started painting graffiti when he was 13 years old. He loves the challenge of creating his name in different forms and styles. It doesn’t matter to him if he works inside or outside. He has a full-time job, but this is his passion and hobby.

Distort on the other hand went to art school in Philly where he was influenced by classical and graffiti art, the home of the graffiti movement. He feels both graffiti art and traditional art have reached their peaks, and for him, by combining what he learned enabled him now to support himself with his art. He agrees with Kasso that it is important to shine a light on the originators and pay respect to their struggle.

The Morris Museum exhibit: AEROSOL: Graffiti/Street Art/New Jersey/Now exhibit that opens September 19th and runs through March 15, 2020  is exposing these artists to an even broader audience. People can see this up close, all in one room with art from very high ceilings to the floor they are standing on which will help them understand and appreciate the enormity of the task. 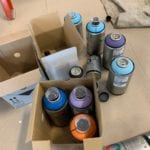 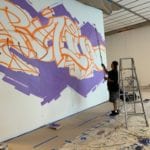 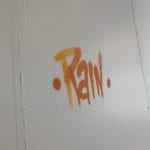 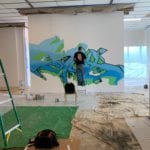 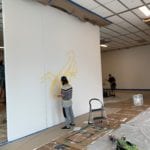 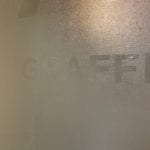 *Graffiti Expressions:
“The graffiti term ‘piece’, short of masterpiece, is used to describe a large, complex, time-consuming and labor-intensive graffiti painting, usually painted by skilled and experienced writers. It is generally agreed that a painting must have at least three colors to be considered a piece, but ‘pieces’ often incorporate color transitions, shadows and three-dimensional effects. The word ‘piece’ is also used as a verb meaning ‘to write’”.

Tag is the most basic and the most prevalent form of graffiti. Tag is a stylized personal signature and contains graffiti writer’s name, also known as a moniker. Graffiti writers often tag their pieces, following the practice of traditional artists who sign their artwork.”

“‘Throw-up’ or ‘throwie’ is a graffiti term, used to describe tag-like drawings of bubble letters designed for quick execution (we all know why), and usually consisting of artist’s name and only two colors”.
Quotes from: Randal, Matt. “10 Graffiti Terms to Remember” Widewalls. October 16, 2014. https://www.widewalls.ch/10-graffiti-terms 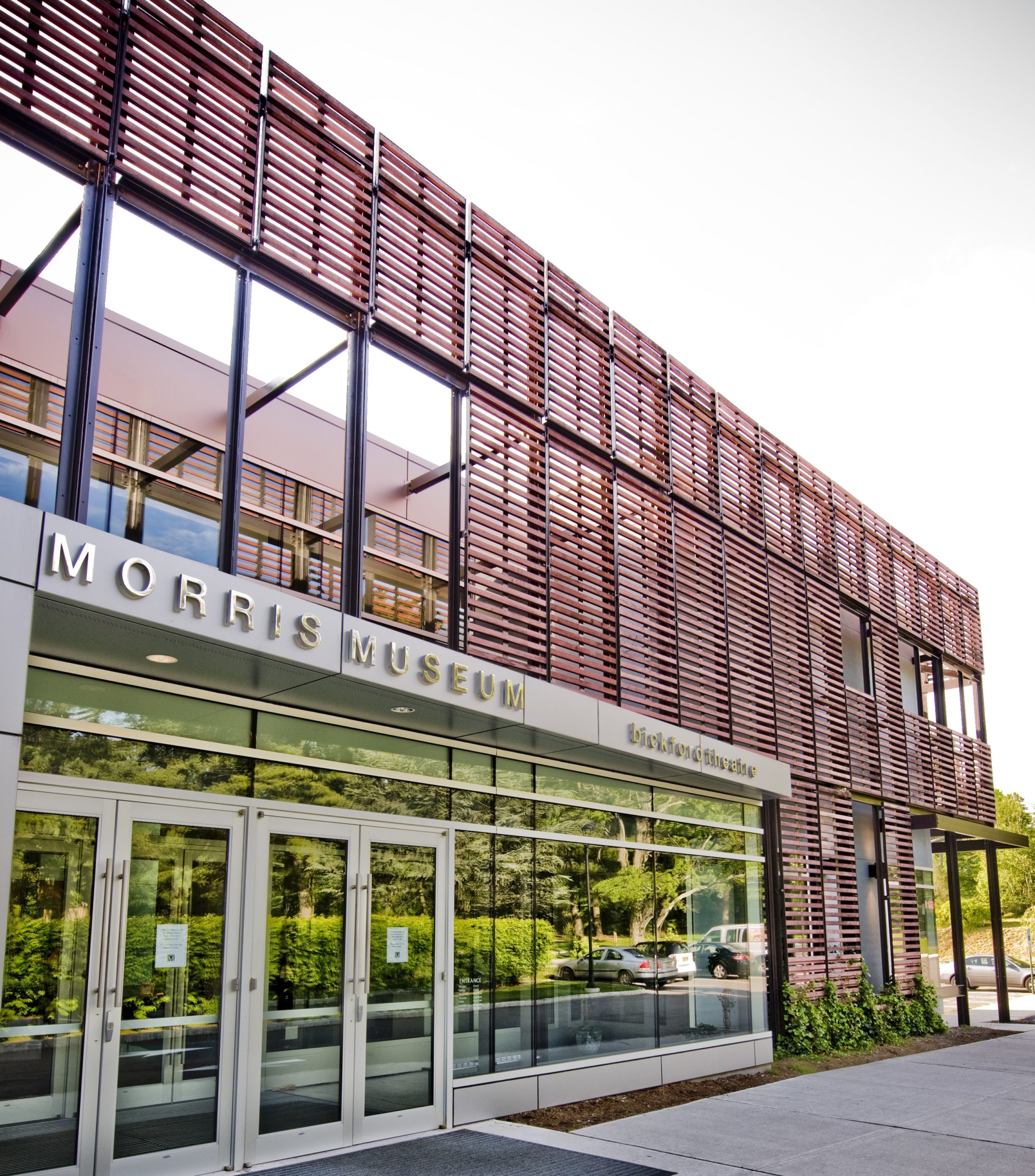 Try These 5 Morris County Museums (Plus Our Favorite Exhibits!) 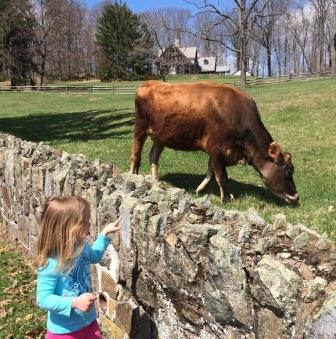 Our Members Create the “New Normal”