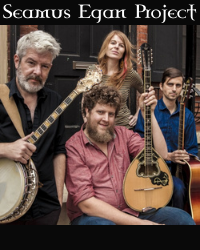 Legendary Irish musician Seamus Egan, founder of the popular band Solas, brings not only his multiple talents but also those of several musical colleagues to the the Lackland Performing Arts Center.

Egan plays the Irish flute, tenor banjo, guitar, mandolin and tin whistle, among other instruments. “From his beginnings as a teen prodigy, to his founding of the Irish-American powerhouse band Solas, to his current project touring with friends and musical guests, Egan has helped define the sound of Irish music today,” Methow Arts said in a press release. As a composer, he was behind the soundtrack for the award-winning film “Brothers McMullen” and co-wrote Sarah McLachlan’s breakout hit, “Weep Not for the Memories.”