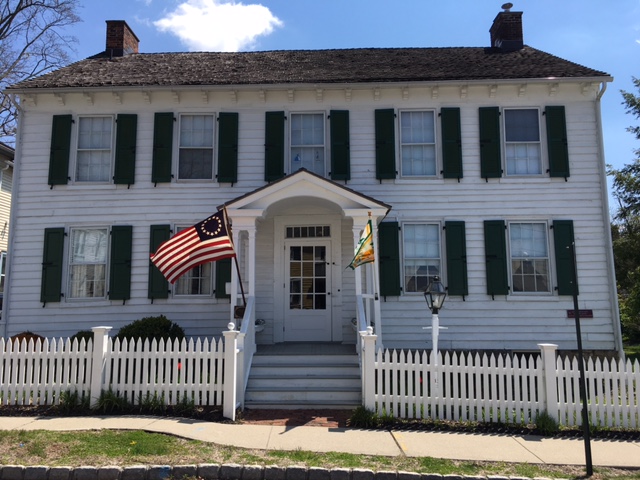 The Morristown Chapter – Daughters of the American Revolution will reopen the Schuyler-Hamilton House for public tours starting Sunday, May 29. The house was closed over the winter months to undergo a major window restoration project.

“The house might have looked sad and abandoned all winter long, but nothing could be further from the truth,” said Chapter Regent Peg Shultz. “With generous grant funding from the Morris County Historic Preservation Trust Fund, we have been actively working on projects that will preserve the Schuyler Hamilton House. Our curators have been busy on other projects to enhance the visitor experience. I hope guests will enjoy the new additions to our collections and refreshed exhibits that focus on Dr. Jabez Campfield who owned the house during the Revolutionary War, the story surrounding founding father Alexander Hamilton and his future wife Besty Schuyler, and Morristown’s significant role in the American Revolution.”

“This is a grand reopening indeed,” said Pat Sanftner, Collections Curator and New Jersey DAR State Historian. “During our downtime, we have been very busy expanding our exhibits and enhancing the visitor experience.”

The museum’s medical history exhibit has been expanded with several new centerpiece items of colonial, Revolutionary War, and Federal Period medicine. A beautiful early nineteenth-century wood apothecary cabinet with original hand-blown medicine bottles will be on view to visitors this spring. The apothecary cabinet was acquired through an endowment from the late Phyllis Sanftner, a past Regent of the Morristown Chapter.

Other items added to the medical history exhibit include a brass surgeon’s lamp dating from the early nineteenth century, leech jars, and a nineteenth-century microscope to demonstrate the evolution of medical science from miasma to germ theory. The new items provide a visual reference to enhance the story of the smallpox epidemic that swept through Morristown during the first winter encampment in 1777.

The DAR also curated a new exhibit focused on the life and times of Dr. Jabez Campfield, the house’s owner during the Revolution. Dr. Campfield was Morristown’s first doctor, an army surgeon, and a civic leader in Morristown. During the closure, Dr. Campfield’s family Bible dating from 1769 was professionally conserved, and each page of handmade paper was cleaned and repaired. Financial support for the Bible conservation was provided by the F. M. Kirby Foundation and the Society of the Cincinnati in the State of New Jersey.

Visitors interested in colonial architecture or historic preservation will want to take special note of the newly conserved 18-century windows, which took seven months to restore.

The general public are welcome to visit on Sundays between 1 and 4 p.m.

Reservations are not required for small groups. School and group tours are also available on request to morristownchapterdar@gmail.com

For additional information please visit the Schuyler-Hamilton House on Facebook or visit the chapter’s website at https://morristownnjdar.org

Get The Latest Information About Tours Here